The legislation created the task force to study and evaluate the difficulties rural ambulance services are faced with that have led to staffing shortages and in some cases, the closure of rescue squads.

O’Connor, who is the Greene County EMS Leader, will aid the task force in making recommendations to the state Legislature regarding policies, programs, funding and legislation that will shore up rural ambulance services and help ensure their long-term viability.

“Rural EMS services across New York state are in crisis due to decades of systemic underinvestment, which is why I authored the legislation to create the Rural Ambulance Services Task Force so that we could bring together some of our state’s most experienced first responders, like Greene County’s Aidan O’Connor, to help us illuminate the detrimental challenges and solve the root causes before it’s too late,” Hinchey said.

He has also been on the board of directors for the Regional Emergency Medical Organization and has been a member of the State Emergency Medical Advisory Committee and co-chairman of the Greene County Ambulance Task Force.

O’Connor also has many years of hands-on clinical experience. He has served as a critical care flight paramedic for LifeNet of New York, where he provided air medical care for patients being transported to hospitals around the state’s rural communities.

He is currently a member of the senior leadership team at Air Methods and a paramedic with Greene County EMS.

O’Connor said it is crucial to support rural ambulance services and the statewide task force will work to identify their needs now and moving into the future.

“I am honored for the opportunity to serve at a time so vital for our EMS providers, EMS organizations, and the patients and communities we serve,” O’Connor said. “It will be imperative that we provide our elected officials with the data and recommendations that will both fix and provide the transformational change we need for our rural EMS system. I wholeheartedly believe in the importance of transport medicine. We know that EMS in New York state can, and will be, a best practice model for the nation.” 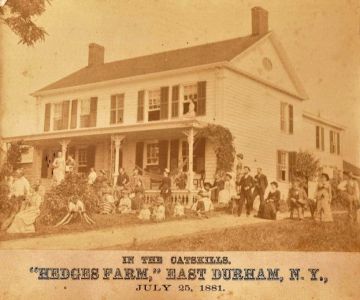 For years the word “homesteading” referred to a government land program and the skills necessary for pioneer living.

The magazine Mother Earth News says that now homesteading is about using less energy, eating wholesome local food, involving your family in the life of the community and making wiser choices that will improve the quality of life for your family, your community and the environment around you. In addition, home businesses are no longer limited to farm produce stands and craft sales, but can include marketing a home business or telecommuting via the Internet.

Today I want to share the story of Hedges Homestead in East Durham, which has exemplified both meanings.

James Barker, The Patroon, a prominent member of the English bar, married Elizabeth Wooer, whose family was said to be of the house of Tudor. Shortly before the American Revolution James and Elizabeth came to America bringing with them 23 tenant farmers and their families.

“Soon after his arrival, he purchased a large tract of land lying in the town of Durham,” Beers History of Greene County states: “The Barker Patent for 6,000 acres extended from the little hamlet of Woodstock [their settlement called Woodstock was located on the present-day Route 32 between Cairo and Freehold], nine miles north to the Town of Durham, situated on both sides of the Katskill Creek.”

The land was chosen carefully for fertility, abundance of water for power and accessibility. Some years before his death in 1820, Barker moved to the home of Obadiah Every, one of his tenants.

In 1825 Henry Hedges and then his son Stephen Hedges bought a portion of the property on what today is Stone Bridge Extension Road. The 1867 Beers Atlas of Greene County refers to the farm as the Patroon Place.

According to the booklet, “James Barker, The Patroon,” by Vernon Haskins, written in 1979, “At the easterly end of East Durham village, an improved road leads northerly and easterly in a wide, sweeping loop, again joining the Susquehanna Turnpike at Stone Bridge. Much of the acreage contained in this loop was a part and parcel of the Barker Patent. The wagon house on this farm was the original house and doubtless was once occupied by the Patroon. Further up the highway from the Hedges Homestead, now the home of the Jennings-Partridge family, we come to Stone Bridge Cemetery. The land upon which it is located was given to the town of Durham for use as a cemetery by the Patroon, James Barker.”

Stephen Hedges who owned the property in 1825 had four children: George (who helped run the farm and was a local photographer), Henry (a teacher in Albany) and two daughters, Margaret (Maggie) and Emma. Maggie married Carcelo Jennings a doctor in Freehold, who died of consumption within a year of their marriage. She and her son Clarence then moved back to the Homestead, which Clarence inherited in the 1920s. Clarence brought the first registered dairy cows to the farm. He ended up showing them all over New York and Ohio in national shows. They would walk the show cows to the train station in Cairo to get to the shows. The family still has ribbons and trophies that are 100 years old.

The third generation of the family included Frances Hedges and Alfred Partridge. Alfred was 50 and a bachelor when they married. He was also a dairyman who brought the Ayrshire cattle to the homestead. Frances and Alfred had three sons: Lowell, Dwight and Eric, all involved today. Eric and his wife Janet have three children: Courtney, Kacie and Cole, also part of the family business. This whole group (except Cole, who is still in high school) have jobs outside the homestead.

But in January 2021 Courtney wrote, “We made a collective agreement as a family that this year would be the ‘Year of Resurrection’ for the farm (I even made everyone sign a piece of paper because I am a dork). Meaning we’d commit to establishing and accomplishing goals to give this place the facelift that it needs. We have a lot of dreams for this farm, but the one that is at the heart of it all is to make sure it’s still standing and standing strong for another century at least. We’ve definitely made some progress- some small projects, some much larger ones, some glamorous and satisfying to see the difference, some not so glamorous and a lot of trips to the dumpster. The best part, though, is the time spent working alongside family and friends. There’s still A LOT of work to be done, but it helps to reflect on all the little things we have accomplished so far. Here’s to a couple more doors, some windows, some siding, and a new water line before the real cold weather gets here.”

The Homestead today is involved in maple syrup production. As Courtney said recently, “The equipment and setup may have changed, but it’s still a family affair, we still use the old A-frame, and we still roast hot dogs in the arch! Alfred Partridge (my grandpa) started tapping trees in the 1970s here at the farm and made sure his three young sons were involved- It’s been very special, as the third generation involved in maple syrup production, to be learning from my uncle and dad, who learned from their dad on the very same trees.

This weekend was jam packed with sap collection and maple syrup production. We are crossing our fingers the sap keeps running like this for a little while! We have fresh syrup, cream, and candy available.”

And Cole — who, as I said, is still in high school, plays sports and is involved in many school activities — is raising and milking several cows. While the family sold their dairy herd in 2015 when milk prices were so low, they are now building it back.

“Cole’s first Ayrshire, Ezzy, who is a descendent of Grandpa Partridge’s herd, was overdue by a few days and we were all convinced she was going to have a bull. So, it was met with a lot of shock and excitement when my dad came in at 6 a.m. Saturday morning to tell Cole his herd had increased to include a March heifer calf. It may seem silly to some, but this moment held so much happiness and pride, because this is the first bred and owned heifer for Cole, and the first bred and owned heifer on the farm in seven years. I know all the industry people will understand how special and important it is to be able to put ‘bred and owned’ at the end of the name. So welcome to the world HH Champ Elly. The first in a while of hopefully many more HH girls here at Hedges Homestead,” Courtney said.

As Mother Earth News said, they don’t yet have a farmstand but you can purchase the products via the Internet through their Facebook page (Hedges Homestead) or by calling 518-577-2580.  Their products are available in local stores such as Nellie’s in East Durham and they will be at The Two Ladies Market at the Milk Run this summer. They also sell hay and plan to raise and sell chicken and pork.

These folks are living the dream — it is clearly hard work, but I don’t know anyone who can live on the homestead their family started in 1825 and bring it into the present. As Courtney said, “It’s always a family effort — the best part about doing all of these projects is the time I get to spend with my family. A lot (aka all) of the craftsmanship in these projects is either done or directly supervised by my Uncle Dwight. He is a man who never expects or wants praise, but I just have to publicly say he is one of the most generous people I know — generous with his time, his talent, and his patience.”

They are truly special folks.

This 1867 Beers map shows the location of The Patroon Places, Hedges Homestead then and now.

The brochure invited guests to the farm, and many came.

Registered Jerseys were shown by C.H. Jennings and sons around the country. 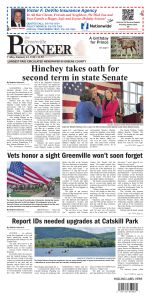 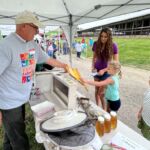 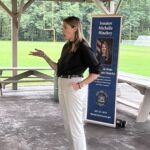