RAVENA — If temperatures in the 90s weren’t enough, you can be certain it’s officially summer when the Mosher Park Pool gears up.

The pool opened June 24 and hosted a fundraiser for the annual Friendship Festival with the summer kick-off pool party July 1.

The concept for the pool party Friday evening was developed by Village Trustee Caitlin Appleby and resident Tina Hotaling, who is also a member of the Ravena-Coeymans-Selkirk Board of Education.

The party was the kick-off of the summer season but served multiple purposes — also raising funds for the annual Friendship Festival in August and picking out a winning design for the festival’s official T-shirt. Seventeen local children submitted designs for the T-shirt contest and the winner was picked Friday evening.

“This was a brainchild between myself and Tina Hotaling,” Appleby said. “We had wanted to get the kids involved more with the Friendship Festival this year. I had the idea for the T-shirt contest and she had the idea for the pool party, so we decided, why don’t we just marry these two ideas and have a great community event.”

The winning design was created by Jacquelyn Cordero, a rising seventh grader at RCS Middle School.

The official T-shirt for the Friendship Festival will feature Jacquelyn’s design and will be sold at the festival.

“It’s all about making people want to be a part of things and drumming up interest for the festival and getting the word out,” Appleby said of the fundraiser and contest. “There are a lot of new people here today that have never been to the festival, so we wanted to expose our new residents of Ravena to the festival. There are also people here from Coxsackie, Coeymans, Selkirk — a plethora of people.”

This was the first time festival organizers hosted a pool party fundraiser or held a T-shirt design contest, and the results were gratifying, Appleby said.

“This is the first time we have done this,” she said. “We are trying it out and so far, I have been getting positive reinforcement so we might do this as an annual thing.”

Hotaling said it was a great way to start the summer season and get people in the community involved.

“We always wanted to do something to kick off the summer and we are pairing it with a T-shirt contest so the kids got involved by doing their own drawings,” Hotaling said.

“The Fourth of July weekend seemed like a great time to do this — we didn’t even have any idea it was going to be 95 degrees today,” she said with a laugh.

Partygoers could pay an optional $5 donation, with all the proceeds going to support the Friendship Festival, which will be held Aug. 27 at Mosher Park. The fundraiser generated enough donations to pay the cost of a face painter during the festival, Appleby said after the event.

Village Trustee Linda Muller said the party was a great way to help support the festival.

“Caitlin put together this wonderful event and we are excited about having the donations go to our festival,” Muller said. “It is a great use of a local community resource. We love bringing everyone here to the village pool.”

Pool Director Darlene Mergendahl said the pool opened June 24 and will remain open until the Friday before Labor Day. So far, about 300 people have gotten pool passes, which are free for village residents. Individuals who live outside the village pay a fee.

“Everyone gets a pool pass, whether they purchased a pass or they are a village resident and they have a pass,” Mergendahl said. “Right now, we have about 300 members so far this year and it is just the first week we have been open.”

People who live anywhere in the RCS school district, including Coeymans, Coeymans Hollow, New Baltimore, Selkirk and Hannacroix, along with Coxsackie, may purchase a pool pass. The cost for an individual is $50, two people pay $100, and a family of three or more pays $125, Mergendahl said.

RAVENA — Patriotism was on full display Thursday when the community turned out to salute its veterans.

Originally known as Armistice Day, the annual federal holiday now known as Veterans Day is meant to honor those who gave of themselves for the good of the country.

“On the 11th hour of the 11th day of the 11th month, the fighting in World War I ended in 1918. Due to the conclusion of ‘the war to end all wars,’ Nov. 11 became a recognized day of celebration,” said Commander Scott Kyle of UNITAS Veterans Memorial Association, also known as VFW Post 9594. “The day was originally declared Armistice Day about eight years after the end of World War I and honored soldiers and Marines of that war, but then in 1954, after World War II and Korea, it was named Veterans Day to honor all those who served the United States.

“Today, we honor all of our veterans who unselfishly placed their lives on hold for something greater than themselves. Those men and women were ordinary people and they heard the call of duty and answered it.”

Covey, a combat Marine Corps veteran who served in Vietnam, pointed out that some veterans have experienced severe trauma and need to come to each other’s aid.

“We are a family and we need to support each other,” Covey said. “There are a horrible number of veterans that have taken their own lives. I just want to do everything in my power to be able to encourage and be available for veterans.”

Korean War veteran Michael Albano was among the veterans attending the service and said remembering the sacrifices that have been made by the troops is critical.

“Veterans Day is important so people never forget,” Albano said after the ceremony. “So many people have lost so many children.”

“I was fortunate. I was in the Navy on a ship, but others were not so fortunate,” Albano said.

Mayor Bill Misuraca said following the ceremony that the community turning out for events like this shows veterans did not serve in vain.

“When veterans see the public, especially the younger generation, I think it shows them that their sacrifice was needed and welcomed and necessary for us to be where we are,” Misuraca said. “They can see what we have because of them.”

Veteran Trip Powell, another VFW past commander, said people need to remember that the impact of military conflict can be harsh.

“People need to remember that conflict has consequences,” Powell said. “It’s important as a country to realize that not everything is about politics and that there are people here who gave of themselves, at risk of their lives, for something bigger than themselves.” 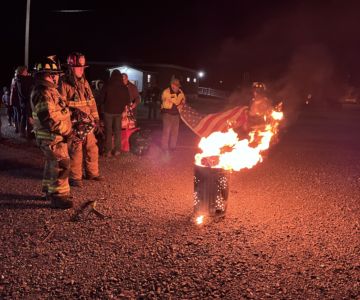 RAVENA — More than 100 flags were disposed of in a flag burning ceremony last Wednesday on the grounds of Ravena VFW Post 9594.

“For flags that are tattered, the correct way to get rid of them is to burn them and after we burn them, we bury the ashes,” Auxiliary member Joseph Eissing said “That is the correct way to do it. The ashes will be burned on the grounds of the VFW Post.”

About 100 flags were collected and properly folded into triangles, then members of the local fire departments oversaw the burning in a special burn barrel.

This was the first time the Auxiliary hosted a public flag disposal ceremony, and the Auxiliary expects to make it an annual event, Eissing said.

Auxiliary President Mary Ellen Rosato said the UNITAS building is being renovated and there were many old, unserviceable flags that needed to be retired. More were collected from community members, she added.

“They are working on the Post and there were so many flags that needed to be disposed of, so we thought to do this as a community event with the kids and the firehouse,” Rosato said. “We are just trying to do things in the community to bring everyone together. It’s really wonderful — there are a lot of people here.”

Flags were collected with the help of Boy Scout Ryan Leonard, who is pursuing the vaunted Eagle Scout rank, the highest rank in scouting. Leonard collected about 60 of the 100 or so flags that were turned in for disposal.

For his Eagle Scout community service project, Leonard built flag-disposal boxes and posted them around the community.

“The project is to collect old and ripped up flags that aren’t able to be flown on a flag post anymore,” Leonard said. “We collected them so they are not just thrown away in the trash and today we are properly disposing of them. I had three temporary boxes — at the New Baltimore firehouse, the Coeymans Town Hall and the New Baltimore Town Hall — and then I built a permanent box here at the VFW and that will stay there forever so people can drop off their flags and the VFW will take care of them. I told Ravena and New Baltimore that if they need somebody to pick them up, I will pick them up.”

Leonard got the idea for the community service project because he had an unusable flag himself. 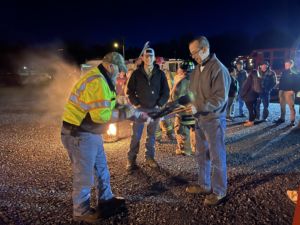 “I figured I would do something for the VFW and I thought about American flags because I had an old American flag that had to be disposed of, so I thought I would do that and see how many I got,” Leonard said. “I really appreciate everyone who donated the flags so     we can retire them properly.”

“We were trying to think how we can get young people in our community involved in patriotic events so we reached out to the schools,” Schmitt said. “There is a Girl Scout group here, there’s a Boy Scout group, the seventh graders get extra credit if they attend, so it has become quite a nice community event.”

VFW Post 9594 Past Commander Trip Powell said there is a very specific ceremony to properly burn U.S. flags and this is the first time the local organization has done so in a public ceremony.

“The Post has always taken flags that people didn’t know what to do with and we would hold them and just have private ceremonies and burn them,” Powell said. “The VFW Auxiliary came up with this idea to do a public burning with a special incinerator unit and then they had the idea to bring on fire companies to join in. It was a really great idea and doing it the day before Veterans Day is touching.” 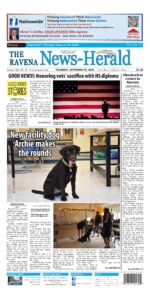 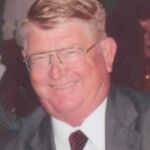 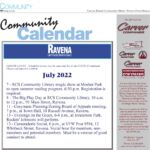